Are you also looking for a way to fight back against the ongoing corporatization and gruesome genetic modification of our everyday food supply? If you are, then join our club of twenty who are very successful in doing so!

My friend Mary Streep agrees that there is no any better way than starting your own organic garden. What you should definitely know is that the organic way of gardening often requires less fertilizer than its chemical counterpart, especially after your soil has been built up after years of composting with a lot of care.

This being said, you can’t go wrong with a choice of quality organic fertilizer. The good thing about the fertilizer is that it is absolutely unnecessary to buy it!  Instead of spending money on it, you can make it at home simply and easily, with only a couple of ingredients.

We had been using Alfalfa meal for years as a fertilizer by just walking down the row pouring dry pellets out of the bag onto the raised bed.  Alfalfa has many beneficial compounds in it and we would often try to fulfill our nitrogen requirement with it, but since it is less than 3% nitrogen we needed lots of expensive bags.  It wasn’t really practical.

The next season we started making controlled alfalfa/water batches and soon learned that it worked better if we first tossed in a handful of soil. After a couple of hours in the insulated vat, the mixture started giving off a strong smell which reminded us of lawn clippings that get left in the catcher for a while. It is a fruity or nutty smell in the early stage of decomposition with aerobic microbes going after the fresh food source.

The mix heated up to 105-110 degrees F (or 41- 430C) and needed to be stirred with a shovel occasionally. About 48 hours into it we had to call it quits because the smell was becoming unbearable, quickly changing from good to bad.

With the next batch we stopped earlier when it still had the fruity smell. We then made one more discovery.  After the sun had been shining on the soil for a few hours and warmed it up we would pour the steaming mixture onto the raised beds and quickly scratch-till it in. An amazing and powerful smell started rising up out of the soil as the fungi, yeast and bacterium went to work on the organic crop residue.

Over the last 5 years we have continued perfecting the recipe. We call the final product “meso,” short for “mesophyllic” which means middle-temperature microbes. The gut of an animal has a similar process going on which is why manure makes such good fertilizer and has a rich smell.

The experiments have paid off for us in increased crop yields and at this point we do not plant anything out before adding the meso first to the soil. Other than crop residue and a little Chilean Nitrate in the irrigation drip lines later in the season, the meso became our main nitrogen source.

You may among those people who are not informed that the popular and versatile Alfalfa crop was recently added to the list of those that can be genetically modified, but it is certainly something to be aware of.
That of course prompts you to grow it organic to be on the safe side. The alfalfa crop is also the “signature ingredient” in the given-below liquid fertilizer recipe, seen as liquid “alfalfa tea” by many of my friends who now use it in their garden. 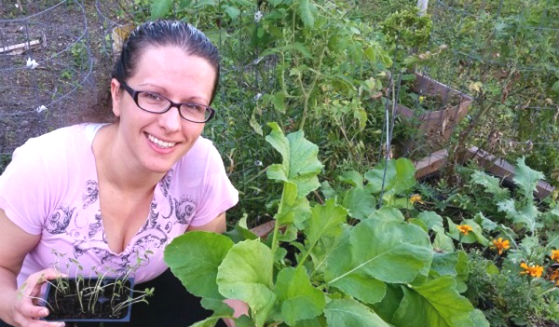 Ms. Mary Smith, the founder of the webpage marysheirloomseeds.com, uses this recipe in her own home garden. “Making your customized liquid fertilizer is pretty easy,” she notes on her blog. “I use seaweed tea every year, but not everyone has access to seaweed. So, now I make Alfalfa tea,” Mary is quick to point out that the tea is Not made for drinking!

Here is how to make Mary’s recipe and super boost your garden with it:

A One to five-gallon bucket (for water, preferably purified)

This liquid fertilizer recipe is especially good for seedlings like the basil ones, shown in the picture above. The fertilizer derived from the leguminous perennial Alfalfa plant is used for pasture and cover crop, as Mary notes on her website.

Also, this fertilizer recipe is considered as an excellent addition to any compost pile due to its nitrogen content and absorbency, and it is especially suitable for roses and other beautifully-flowering plants.

As Mary puts it: “The Alfalfa meal can help you restore soil quality, and thus will bring back its full growing potential. With a unique 3:1:2 ratio, the Alfalfa meal is an all-natural, organic fertilizer that replenishes sugar, starches and proteins that help keep your plants growing healthy and strong.”

She accounted that this particular fertilizer is excellent for seedlings, boosting their growth by as much as 50 percent [as compared with non-fertilized soils].