What is bok choy?

Chinensis varieties do not form heads. Instead, they have smooth, dark green leaf blades forming a cluster reminiscent of mustard or celery. Chinensis varieties are popular in southern China and Southeast Asia. Being winter-hardy, they are increasingly grown in Northern Europe as well.

Bok choy contains a high amount of vitamin A per 4 oz. of serving – about 3500 IU. Bok choy also contains approximately 50 mg of vitamin C per 4 oz. serving. Chinese white cabbage was ranked second for nutrient density out of 41 “powerhouse” fruits and vegetables in a peer-reviewed US Center for Disease Control study.

This nutrition powerhouse supplies loads of nutrients for little calories. So, if you are trying to eat healthier, cruciferous vegetables like bok choy should be at the very top of your grocery list!

But pay close attention: Bok choy contains glucosinolates. These compounds have been reported to prevent cancer in small doses, but, like many substances, can be toxic for humans in large doses, particularly to people who are already seriously ill.

Along with celery and onions, bok choy can also be easily re-grown. This is a fantastic way of cutting your food bills.Why not try it for yourself!

Just like with celery, this interesting cabbage is able to regenerate itself from its cut basis. Since bok choy is so similar to celery in shape and other properties, we figured out we had nothing to lose by trying — and as you can see, we made it!

Simply chop the bok choy from the base and place it – face upwards – in a small bowl of warm water to sit. 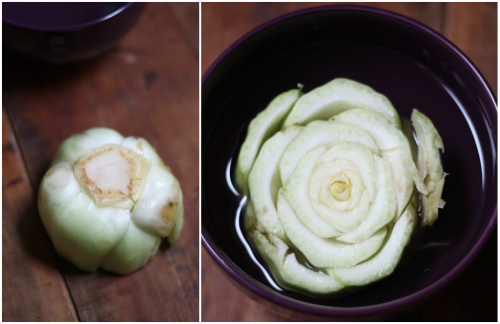 Even more quickly than the celery, the bok choy will begin to regenerate itself from the center of the base, virtually overnight. This particular bok choy you see in the pictures was over a few weeks old and still regrew itself like magic.
In over a week’s time, our Bok Choy is still in the bowl of water and already looks like this: 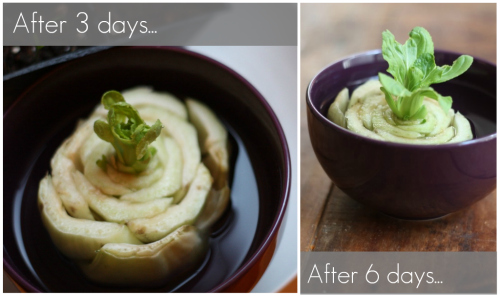 We will soon transfer this newly growing bok choy over to a planting pot of its own to continue growing in soil.
So, join the club and take this vegan challenge. Get ready for your next cooking adventure! 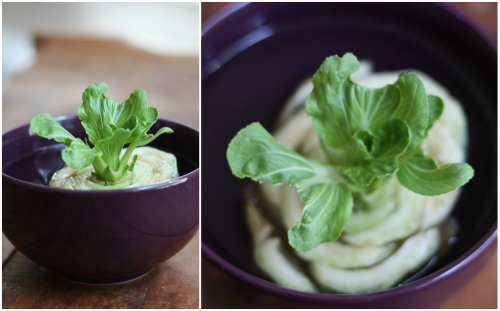 Since it is the first time we have tried regenerating plants like these, we’re not sure how many times over it works, though being able to save 2-3 purchases over time is worth our while!

Projects like these are also a great way to teach children in a fast way how plants and food can grow indoors.
If any of you have had luck regenerating other vegetables in a similar way, we’ll be glad to know since we are having too much fun giving them a whirl!